In March 2012 The FOPS were granted recognition as a Charity by HMRC - Reference XT33456. Ten Trustees were then appointed and held their first meeting on Weds 6th June. The date of the AGM was agreed to be Wednesday 13th March 2013.

The FOPS carry out fundraising, awareness and social events.

The FOPS charity is non-profit making and gives to worthy prostate research causes. 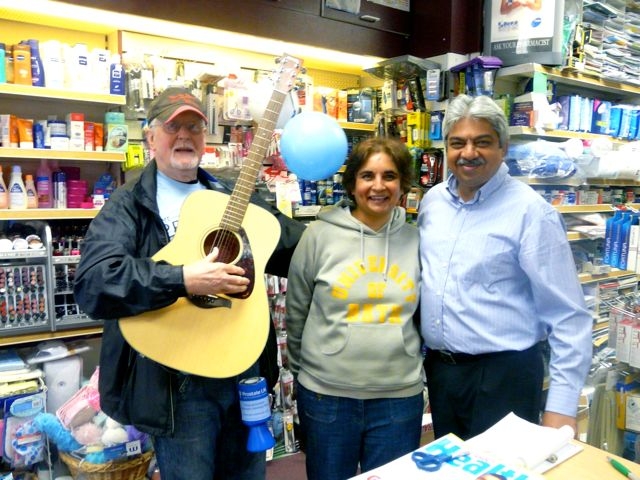 April saw the second FOPS concert in the Chorleywood Memorial Hall starring the Magnificent Mutton with Donna and her friends amusing us greatly with their mid-aged female humour. Then the finale from the wondrous Janet Seidel Trio who took the packed hall apart with encore after encore.

January was when Elizabeth Martindale from Macmillan trained us how to deal with those coming to terms with the affliction of prostate cancer by listening and letting them talk just like the wise old owl sitting on the oak the more he listened the less he spoke the less he spoke the more he heard ...I wish I was like that wise old bird...well Elizabeth showed us how to be more helpful.

Then in May - from out of no-where - founder member and Councillor Mick Flinn took over the Pinner Hill Golf Club and organised a four ball and a magnificent meal in the evening and raised over £2000 and we all had a terrific day chasing golf balls all over the hills of Pinner.

Then came the 2nd June and the FOPS Prostate Roadshow in the Memorial Hall Chorleywood which was packed to bursting with not a spare chair anywhere. 149 Men gave blood and were PSA tested and all got advisory letters from the Consultant Urologist Graham Baxter Smith.who with Alvan Pope and Julian Shah our President and Vice President gave a fascinating Chat-In session to the packed and very focussed audience who questioned and commented in rapt attention...at least until the singing started with Jim and Bob and Jumping Jules all hammering out their prostate songs to a bemused audience....So a great evening had by all....

In November The Janet Seidel Trio very kindly agreed to play a concert for a nominal fee and so we blitzed the area with posters as the Penguin Book of Jazz says of the Seidels that they are the greatest in the southern hemisphere...all true very true the audience would not let the last song be the last song ….and so the concert ended rather late into the night.....

During 2009 the FOPS organised or supported:

David's Story My life revolves round historic sports and racing cars, as does that of my wife and our three sons. I have raced cars for over forty years and always considered myself to be a reasonably fit and healthy guy. When in 2007 I had a mini heart problem I thought “well ok I have a mechanical proble... Read more...

From 7.45pm (for 8pm start) on Wednesday 13th July 2022, we will be holding another Virtual Support Group meeting with our resident Consultant Urologists... Read more...

View all of our events